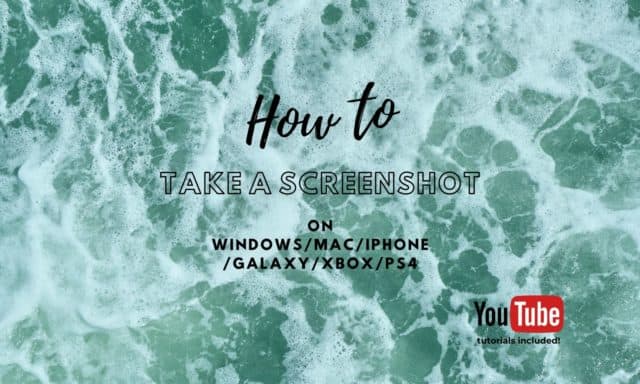 You can’t be taking photos of your Mac or Windows screen with a phone camera all the time. There’s bound to be wavy lines all over the photo of your computer screen. It’s called the Moiré effect by the way. And it is caused due to the refresh rates of the monitor screen and the camera. So, what’s a better way to send those images to your friends and colleagues? Take a screenshot of course! To all Apple and Windows fans, here’s how to take a screenshot on Mac and Windows.

Disclaimer: We will only be sharing the basic and easiest methods to take screenshots and no third party software will be required in this tutorial.

How to Take A Screenshot on Mac – For Apple Users

Although the Mac is known to keep things simple and has probably one of the best user interfaces for an operating system, it tends to have a few thousand shortcuts under its sleeves.

And that includes taking a screenshot. Which is why we are writing an article on how to take a screenshot on Mac.

Unlike Windows, there are several keyboard shortcuts that you have to memorise that will take screenshots in different ways.

Of course, on the plus side, no software is required for taking screenshots. Just a keyboard combination.

And the screenshots will automatically be saved to your desktop

While some combinations only work for newer Macs (macOS Mojave 2018 onwards) or MacBook Pros, it is still a good thing to note.

Here are the keyboard combinations you need to know:

1. Command-Shift+3: Take a screenshot of the entire screen

2. Command-Shift+4: Take a screenshot of a selected portion of the screen (Like Windows’ Snipping Tool)

3. Command-Shift+5 (for macOS Mojave 2018 onwards): Opens up an intuitive on-screen menu for users to select whether to record video (entire screen or portion of the screen) or capture a still image of your screen.

4. Command-Shift+6 (MacBook Pro): Take a screenshot of the Touch Bar.

How to Take Screenshot on Windows 10 – For PC Users

Yes, you may already know that a PrtScn exists on your keyboard or use the famous Snipping Tool on a daily basis.

But that’s not all to the Windows 10.

Here are some useful ways to remember for taking screenshots on Windows 10:

1. PrtScn button: Pressing it once on your keyboard captures the entire screen and saves it to your clipboard (equivalent to a Control+C). To save it as an image, fire up Paint and paste (Control+V) your screenshot onto it.

2. Alt + PrtScn: This snips the active window to the clipboard, which you can paste on Paint. An active window basically means the program window that you are currently on, e.g a Google Chrome window.

3. Windows key + Shift + S: The screen will dim and the mouse pointer will change into a crosshair symbol. There will be a panel at the top of your screen, allowing you to choose between different snip options – rectangular, freeform, window and full-screen snip. Once selected, you can drag to select a portion of the screen to capture. The screenshot will be copied to the clipboard, which again, allows you to paste on Paint. Do note that this shortcut only works if you have the newest version of Windows 10 installed, called the Windows 10 Creators Update.

4. Windows key + PrtScn: This saves the entire screen as an image file without requiring any copy and pasting from your clipboard. You can find the saved screenshot in the “Pictures” folder, in a subfolder named “Screenshots.”

5. Snipping Tool (Inbuilt software): The good old regular tool that most users are most comfortable with. It works exactly the same way as method 3, just with a different user interface. There is also a newer version of the Snipping Tool named Snip & Sketch.

Ever since the home button went missing in both the newer versions of the iPhone and Galaxy, it’s true that tons of people are clueless when it comes to taking screenshots. Here are some bonus tips for staying with us on this guide until now.

1. iPhone X (and other similar models): Press Volume Up key and Power button at the same time. Alternatively, turn on assistive touch in Accessibility settings and you can take screenshots with the interface.

2. Samsung S10 Plus (and other similar models): Press Volume Down key and Power button at the same time.

There will also be a tiny popup of the screenshot at the bottom of your screen. Pressing on the popup will allow you to view it immediately after taking the screenshot. From there, you can also choose to delete the image quickly without launching the gallery app.

For Gamers – Taking Screenshots on a PS4 or Xbox One

Still here? Hope you are a gamer then.

Here’s how to take screenshots on a PS4 or on an Xbox One and One S.

2. Xbox One and Xbox One S: First, make sure your console is up to date. Double-tap the controller’s Xbox button will bring up the screenshot panel. Press “Y” and a screenshot will be taken. Alternatively, shout “Xbox, take a screenshot” on your Kinect will do the same trick.

Related to How to Take a Screenshot on Mac or on Windows:

Donate Blood in Singapore – What You Should Know Before Doing It!